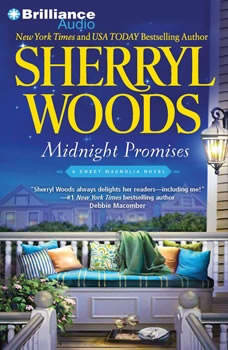 When Elliott Cruz first courted struggling single mom Karen Ames, it was a romance worthy of any Sweet Magnolia fantasy. The sexy personal trainer made it his mission to restore Karen’s strength—physical and emotional—and to charm her children.Now, a few years into the marriage, colliding dreams threaten to tear them apart. Elliott’s desire to finance the business opportunity of a lifetime with their hard-earned “baby money” stirs Karen’s deep-rooted financial insecurities. It’s the discovery that their brother-in-law is cheating on Elliott’s sister—and thinks it’s justified—that puts their irreconcilable differences into perspective. Will their own loving fidelity be a bond so strong they can triumph against all odds?“Woods is the master of conveying emotions of the heart.” —RT Book Reviews on Beach Lane

The Inn at Eagle Point
by Sherryl Woods

It’s been years since Abby O’Brien Winters set foot in Chesapeake Shores. The Maryland town her father built has too many sad memories and Abby too few spare moments, thanks to her demanding Wall Street career, the crumbling of her marri...

Home in Carolina
by Sherryl Woods

There’s no place like home, especially if it’s Serenity, South Carolina. For Annie Sullivan, though, the homecoming is bittersweet. She’d always envisioned a life there with her childhood best friend, Tyler Townsend. But Ty’s...

Revisit the heart of the O'Brien family in this special release of Harbor Lights by #1 New York Times bestselling author Sherryl Woods-and watch for the Chesapeake Shores series on the Hallmark Channel!Struggling in his role as a newly single father...

Jess O’Brien has overcome a lot — the challenges of attention deficit disorder, the near bankruptcy of her beloved Inn at Eagle Point and her self-perception as a screwup in a family of overachievers. Now she’s ready to share the f...