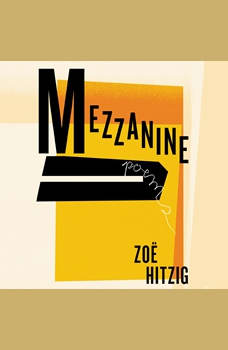 An inventive and assured debut from an exciting new voice in poetry.

In her striking collection of poems, Zoe Hitzig investigates how we seek certitude, power, and domination over the natural world and one another. Hitzig brings a scientific rigor to her poetry, as well as a raucous energy and willingness to allow her work to exist in states of uncertainty and precariousness. The result is an original voice that is incisive and unsparing, but also passionate and tender. Her poems probe the authority of language, exploring the surprising and powerful resonances that can be found among words and ideas.

Urgent in its creation of a new way of looking at our social and natural worlds, Mezzanine is an insightful and visceral debut collection from a poet whose work is poised to leave a lasting mark.