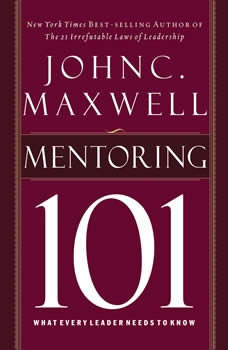 Ask the best leaders in any organization how they learned to be successful, and you often hear the same answer: they had a good mentor.

Now international leadership expert John Maxwell gives the bottom line on mentoring in one short, easy-to-read volume. In Mentoring 101, he gives the steps needed to effectively reproduce your success in someone else. He explains how to choose the right person to mentor, how to create the right environment for leaders to thrive and grow, and how to get started.

What if you spent your entire life achieving but never shared your wisdom with anyone else? don't let your success end with you.

As a mentor, you can create a legacy that will last long after you are done reading.

The 21 Irrefutable Laws of Leadership
by John C. Maxwell

This unique Deluxe Audio Edition of the New York Times bestseller includes the unabridged audio book on three CDs; a highly designed, 24-page, 4-color booklet; and a fourth CD with a presentation in PowerPoint format that you can share with others o...

Unleash your leadership potential.No matter who you are, you can lead—and lead well.That is the message New York Times bestselling author John C. Maxwell gives in this power-packed guidebook: Leadership 101. Here the consummate leader offers a...

If you can win with people, you can win!Many people focus on other talents and abilities first- such as polishing their communication or leadership skills or taking courses to expand their base of knowledge- but they forget that good relationships a...