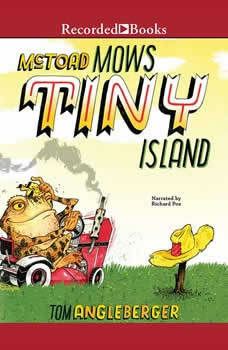 McToad likes Thursdays. Why? Because on every other day of the week, McToad mows Big Island, but on Thursdays, McToad mows Tiny Island. To do so, he puts his mower on the back of a truck, which drives to a train, which goes to a helicopter, which flies to a boat, which uses a crane to put the lawn mower onto Tiny Island. There McToad mows and drinks some lemonade, and before you know it, it's time to turn around and go back home. But first, the mower has to get lifted by a crane, to get put back on a boat, which is lifted by a helicopter, and . . . well . . . you get the idea.

The Strange Case of Origami Yoda
by Tom Angleberger

A journalist and fiction author, Tom Angleberger has a knack for capturing the lives of today’s youth. In The Strange Case of Origami Yoda, socially awkward Dwight shows up to school one morning waving a green finger puppet. Strange enough, b...

The Littlest Train
by Chris Gall

In this endearing story of a tiny toy train, the creator of the hit series Dinotrux now breathes life into more than a half-dozen trains that climb, haul, chug, zip, and zoom.In a small room, down a short flight of stairs, there lives a little toy ...

New York Times bestselling author-artist James Dean brings us a new Pete the Cat adventure, a special reimagining of “The Tortoise and the Hare” as a race between Pete and Turtle, in Pete the Cat: Go, Pete, Go!Ding, ding. There’s ...

If I Built a Car
by Chris Van Dusen

"If I built a car, it'd be totally new! Here are a few of the things that I'd do. . . ." Jack has designed the ultimate fantasy car. Inspired by zeppelins and trains, Cadillacs and old planes, with brilliant colors and lots of shiny chrome, this far...

Ian Fleming, best known for his James Bond novels, wrote only one children’s book—and it is a classic! Chitty Chitty Bang Bang is the name of the flying, floating, driving-by-itself automobile that takes the Pott family on a riotous seri...

Zooom! Wooeeee . . . ! "Make way!" The big city sure is a speedy, noisy place for a country truck like Blue. Everywhere Blue looks, he sees buses, police cars, taxis, vans, a street sweeper, and even the mayor's limousine. With everyone pushing to b...

The Little Engine That Could
by Watty Piper

The story of a train filled with toys and gifts for little boys and girls that breaks down before reaching the children. After asking several passing trains for help over the hill, a little blue train agrees to help the stranded toys. Even though ...