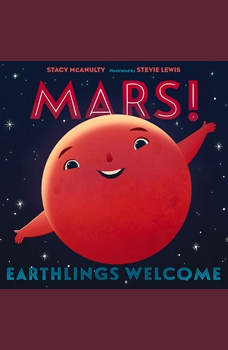 From writer Stacy McAnulty, Mars! Earthlings Welcome is a light-hearted nonfiction audiobook about the red planet—told from the perspective of Mars himself...

Meet Mars! The red planet. Planet Marvelous. Favorite sibling of Earth (or so he claims). Sometimes they're close (just 34.5 million miles apart). Sometimes they need space (250 million miles apart)! Earth and Mars have a lot in common—clouds, mountains, polar icecaps. And while Earth has Earthlings, Mars makes a persuasive case for why people should make the journey to spend time with him. His day is 7 minutes longer! He is home to the largest volcano in the whole solar system. He's, well, marvelous.

With characteristic humor and charm, Stacy McAnulty channels the voice of Mars in this next celestial "autobiography" in the Our Universe series. Rich with kid-friendly facts, this is an equally charming and irresistible audiobook.

A Macmillan Audio production from Henry Holt and Company

Has there ever been life on Mars? Will we be living there soon? HOW?! Discover the past, present, and future of the mysterious red planet in this non-fiction book for kids.The launch of Mars rovers by NASA, Europe, and China in 2020 will reveal more...

The Planets and The Solar System
by Jen Green

Living busily on Planet Earth, we rarely remember that we inhabit only a miniscule part of the universe. In The Planets and The Solar System, Jen Green paints the wider picture, and takes us on a journey across billions of kilometres in our galaxy, ...