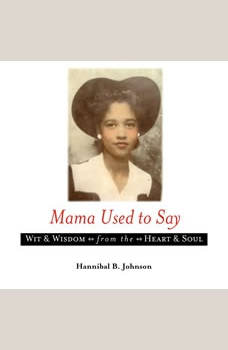 In Mama Used to Say, Hannibal Johnson flawlessly captures the collective wisdom passed from generation to generation with a beguiling blend of wit, wisdom, and insight. Following each of the heartwarming nostalgic narratives are the most quotable of quotes—the very words that echo through the memories of our childhoods.

An imaginative blend of Mama's brand of comforting common sense and her gentle ethical and moral lessons, Mama Used to Say is full of insights as illuminating as they are honest. Both inspirational and touching, the book is much more than just a meditation on the timeless bond between mothers and children—it is a testimony to the instinctive capacity of all mothers to love and to nurture their children not just through deeds, but through the spirited words that touch their souls.

Pourin' Down Rain
by Cheryl Foggo

The 30th anniversary edition of Cheryl Foggo’s landmark work about growing up Black on the Canadian prairiesCheryl Foggo came of age during the 1960's in Calgary, a time when a Black family walking down the street still drew stares from everyo...