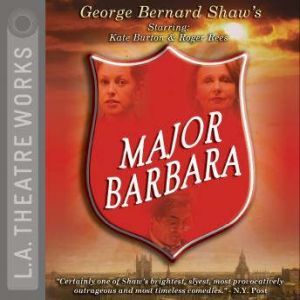 Barbara is a major in the Salvation Army - but shes also the daughter of Andrew Undershaft, a man whos made millions from the sale of weapons of war. The real battle, however, rages between between the devilish father and his idealistic daughter as they answer the question: does salvation come through faith or finance? This sparkling comedy traverses family relations, religion, ethics and politics - as only Shaw, the master dramatist, can! An L.A. Theatre Works full-cast performance featuring: JB Blanc as Bill Walker/Dialect Coach Kate Burton as Lady Britomart Matthew Gaydos as Snobby Price/Bilton Brian George as Morrison/Peter Shirley Hamish Linklater as Stephen Undershaft Henri Lubatti as Adolphus Cusins Tony Palermo as Sound Effects Artist Kirsten Potter as Barbara Undershaft Roger Rees as Andrew Undershaft Russell Soder as Charles Lomax Amelia White as Rummy Mitchens/Mrs. Baines Missy Yager as Sarah Undershaft Sarah Zimmerman as Jenny Hill Directed by Dakin Matthews. Recorded before a live audience at the Skirball Cultural Center, Los Angeles in December, 2007. Coauthors: Adapted By Dakin Matthews