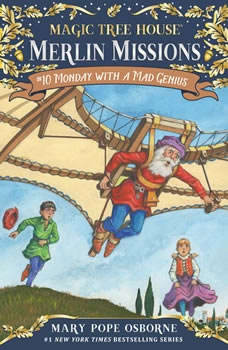 Jack and Annie are on a mission to save Merlin from his sorrows! The brother-and-sister team travel back in the magic tree house to the period known as the Renaissance. This time, Jack and Annie will need more than a research book and a magic wand. They'll need help from one of the greatest minds of all time. What will they learn from Leonardo da Vinci?

Season of the Sandstorms
by Mary Pope Osborne

The #1 bestselling chapter book series of all time celebrates 25 years with new covers and a new, easy-to-use numbering system! Jack and Annie travel back in time to a desert in the Middle East. There they meet a Bedouin tribe and learn about ...

The #1 bestselling chapter book series of all time celebrates 25 years with new covers and a new, easy-to-use numbering system! The Ice Age is very cool…for two kids in bathing suits! Jack and Annie nearly freeze when the Magic Tree Hou...