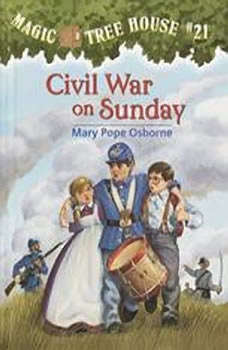 Cannon fire! That's what Jack and Annie hear when the Magic Tree House whisks them back to the time of the American Civil War. There they meet a famous nurse named Clara Barton and do their best to help wounded soldiers. It is their hardest journey in time yet—and the one that will make the most difference to their own lives!

Are you ready for some of the most exciting, death-defying escape stories ever told? Perfect for fans of the I Survived series, the second installment in a brand-new, edge-of-your-seat series based on real events!Winter 1838—Kentucky. Determin...

Two teenage sisters are in an automobile accident a few miles from the Civil War battlefield at Shiloh. Penny, the older sister, is killed outright, while Sandy ends up in a coma, seeing visions of oddly dressed people speaking a strange form of Eng...

Cadmus Henry, mounted on one of the finest mares in Virginia and perfectly turned out from head to toe, dreams of charging intrepidly into battle under the orders of General Lee himself. Unfortunately, young Cadmus can write and is therefore assigne...

Pink and Say
by Patricia Polacco

When Sheldon Russell Curtis told this story to his daughter, Rosa, she kept every word in her heart and was to retell it many times.     I will tell it in Sheldon's own words as nearly as I can.He was wounded in a fierce battle and le...

Are you ready for some of the most exciting, death-defying escape stories ever told? The third installment in the unputdownable Great Escapes series is here—perfect for fans of the I Survived series!Civil War, 1863. Virginia. Union soldiers Co...

Wonder at the Edge of the World
by Nicole Helget

In this captivating quest that spans the globe, a young girl who wants to know everything challenges her assumptions about family, loyalty, and friendship as she fights to save her father's legacy--and to begin creating her own.Hallelujah Wonder wa...