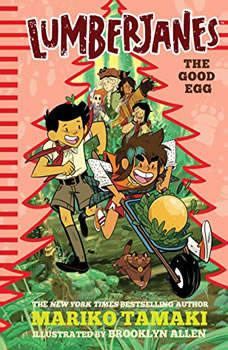 Based on the bestselling graphic novels from BOOM! Studios, everyone's five favorite campers are back for totally new, action-packed adventure. Welcome to Miss Qiunzella Thiskwin Penniquiqul Thistle Crumpet's Camp for Hardcore Lady Types. The five scouts of Roanoke cabin-Jo, April, Molly, Mal, and Ripley-love their summers at camp. They get to hang out with their best friends, earn Lumberjane scout badges, annoy their no-nonsense counselor Jen . . . and go on supernatural adventures. That last one? A pretty normal occurrence at Miss Qiunzella's, where the woods contain endless mysteries. Book three shines the spotlight on Ripley, the smallest, youngest, most animal-loving member of the cabin. When Ripley comes across an abandoned egg, she's determined to take care of it until the parent comes back. Unfortunately, her plan is quickly foiled by egg poachers, who steal the egg for their own collection.