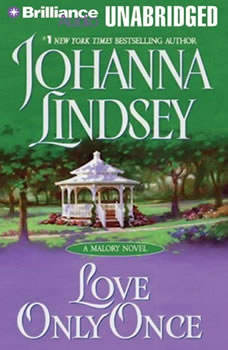 The exquisite niece of Lord Edward and Lady Charlotte Malory, Regina Ashton is outraged over her abduction by the arrogant, devilishly handsome Nicholas Eden - and is determined to make the rogue pay…with his heart. A golden-haired seducer, Nicholas has been hardened by a painful secret in his past. And now that he has besmirched Reggie’s good name, the hot-tempered lady has vowed to wed him. Her fiery beauty stirs Nicholas as no woman ever has - and the rake arouses Reggie’s passion to an unendurable level. Such uncontrolled desires can lead only to dangerous misunderstandings…and, perhaps, to a love that can live only once in a lifetime.

Wonderful! All the books on the Mallory's are great to read. You will laugh and want to read to books over and over.