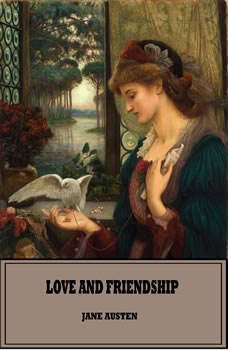 Impossibly beautiful, disarmingly witty, and completely self-absorbed: Meet Lady Susan Vernon, both the heart and the thorn of Love & Friendship. Recently widowed with a daughter who's coming of age as quickly as their funds are dwindling, Lady Susan makes it her mission to find them wealthy husbands--and fast. But when her attempts to secure their futures result only in the wrath of a prominent conquest's wife and the title of 'most accomplished coquette in England', Lady Susan must rethink her strategy. Unannounced, she arrives at her brother-in-law's country estate. Here she intends to take refuge - in no less than luxury, of course - from the colorful rumors trailing her, while finding another avenue to 'I do'. Before the scandalizing gossip can run its course, though, romantic triangles ensue. Written in epistolary form, it resembles a fairy tale as much as anything else, featuring wild coincidences and turns of fortune, but Austen is determined to lampoon the conventions of romantic stories, right down to the utter failure of romantic fainting spells, which always turn out dreadfully for the female characters. In this story one can see the development of Austen's sharp wit and disdain for romantic sensibility, so characteristic of her later novels.