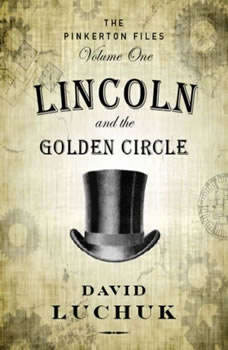 Lincoln and the Golden Circle: The Pinkerton Files, Volume 1

The Pinkerton Files is based on the new audio series starring Battlestar Galactica's Michael Hogan. It sets the real cases of America’s first private detective in a world of radical inventions driving a bitterly divided nation toward civil war.Agency founder Allan Pinkerton senses a conspiracy mounting against him, his sons and his operatives. Every step they take toward solving three seemingly disconnected cases draws them further into a conflict that will be their downfall. If Allan allows them to become embroiled in the war, they will never find their way out.Lincoln and the Golden Circle launches as a simple assignment to protect a rail line from sabotage but explodes when one of Allan’s agents is murdered, his son is arrested and his protege is wickedly assaulted. With police descending on his headquarters, Allan must choose whether to commit his detectives to a death defying sprint in a final attempt to save the President’s life.

The Academy
by Robert Dugoni

Quitting her job as a high school science teacher to join the Seattle Police Department was an easy decision for Tracy Crosswhite. Years earlier, what should have been one of the happiest days of her life instead became her worst nightmare when her ...