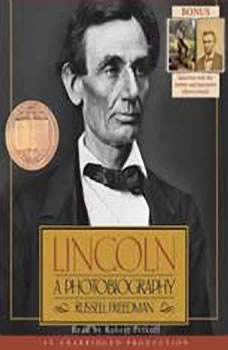 Abraham Lincoln stood out in a crowd as much for his wit and rollicking humor as for his height. Here is a warm, appealing biography of our Civil War president.
Russell Freedman begins with a lively account of Abraham Lincoln’s boyhood, his career as a country lawyer, and his courtship and marriage to Mary Todd. Then the author focuses on the presidential years (1861 to 1865), skillfully explaining the many complex issues Lincoln grappled with as he led a deeply divided nation through the Civil War. The audiobook’s final chapter is a moving account of that tragic evening in Ford’s Theatre on April 14, 1865.
Lincoln: A Photobiography concludes with an interview with the Author.