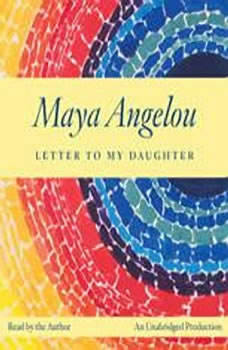 Letter to My Daughter

For a world of devoted fans, a much-awaited new volume of absorbing stories and inspirational wisdom from one of our best-loved writers.

Dedicated to the daughter she never had but sees all around her, Letter to My Daughter reveals Maya Angelou’s path to living well and living a life with meaning. Told in her own inimitable style, this book transcends genres and categories: guidebook, memoir, poetry, and pure delight.

Here in short spellbinding essays are glimpses of the tumultuous life that led Angelou to an exalted place in American letters and taught her lessons in compassion and fortitude: how she was brought up by her indomitable grandmother in segregated Arkansas, taken in at thirteen by her more worldly and less religious mother, and grew to be an awkward, six-foot-tall teenager whose first experience of loveless sex paradoxically left her with her greatest gift, a son.

Whether she is recalling such lost friends as Coretta Scott King and Ossie Davis, extolling honesty, decrying vulgarity, explaining why becoming a Christian is a “lifelong endeavor,” or simply singing the praises of a meal of red rice–Maya Angelou writes from the heart to millions of women she considers her extended family.

Like the rest of her remarkable work, Letter to My Daughter entertains and teaches; it is a book to cherish, savor, and share.


“I gave birth to one child, a son, but I have thousands of daughters. You are Black and White, Jewish and Muslim, Asian, Spanish speaking, Native Americans and Aleut. You are fat and thin and pretty and plain, gay and straight, educated and unlettered, and I am speaking to you all. Here is my offering to you.”

–from Letter to My Daughter


Grateful acknowledgment is made to the following for permission  to reprint previously published material:

A work of great personal courage and a literary tour de force, this bestseller is Styron's true account of his descent into a crippling and almost suicidal depression. Styron is perhaps the first writer to convey the full terror of depression's psyc...

Dostoevsky in 90 Minutes
by Paul Strathern

In Dostoevsky in 90 Minutes, Paul Strathern offers a concise, expert account of Dostoevskys life and ideas, and explains their influence on literature and on mans struggle to understand his place in the world. The book also includes selections from ...

A highly sensitive and intelligent child, Virginia Woolf grew up in a large family prone to psychological instability. Throughout her life, she was subject to periods of mental breakdown, yet when she was lucid she was capable of a uniquely percepti...

Kafka in 90 Minutes
by Paul Strathern

In Kafka in 90 Minutes, Paul Strathern offers a concise, expert account of Kafkas life and ideas, and explains their influence on literature and on mans struggle to understand his place in the world. The book also includes selections from Kafkas wri...

Beckett in 90 Minutes
by Paul Strathern

Samuel Becketts work evokes passionate responses: readers and playgoers either revere it or consider it a load of pretentious nonsense. But his philosophy of pessimism will always find a new generation of young readers, for it bursts the rainbow soa...

Borges in 90 Minutes
by Paul Strathern

Weaving fiction with fact, fantastic matter with historical figures, Borges frequent theme of a world where time, culture, and place converge is not only timely but pertinent in our advance toward globalization. Drawing from his multiethnic and ling...

By the end of his life, D. H. Lawrence had despaired of Western civilization, which he felt had corrupted and weakened the human spirit. He believed that we had somehow lost touch with our instinctual being and no longer responded to the "true voice...

Hemingway in Love
by A. E. Hotchner

In June of 1961, A.E. Hotchner visited an old friend in the psychiatric ward of St. Mary's Hospital. It would be the last time they spoke: a few weeks later, Ernest Hemingway was released home, where he took his own life. Their final conversation wa...

From a young age, James Joyce showed a precocious and original intellect and a confidence in his own artistic destiny. He would indeed go on to transform the nature of modern literature, employing a unique streamofconsciousness technique rich in sym...