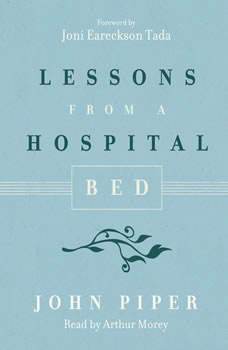 Lessons from a Hospital Bed

Physical sickness affects more than just our bodies; it takes a toll on our emotional and spiritual health as well. In this honest book, best-selling author John Piper shares ten lessons he learned while in the hospital. Written to help those in the hospital focus their attention on God, his grace, and his plan—when such focus can be especially hard—this volume blends together personal narrative with biblical reflections to help readers rely on the God who stands ready to comfort and support his people. Whether it’s cultivating a sense of gratitude, resisting the temptation to watch television 24/7, or looking for ways to serve those around them, this book encourages those who are sick to fight for faith in the midst of their illness.

A Double Dose of Dilaudid
by Kerry Hamm

Welcome to a small-town Emergency Room in rural Ohio. While it's true our ER doesn't see the stabbing and gunshot action ERs see in inner cities, we have no shortage of the sad, the scary, the painful, and the just plain dumb. With more than twenty...

In My Hands
by Steven A. Curley

In IN MY HANDS, surgical oncologist Dr. Steven Curley shares the empowering lessons he's learned over 25 years from his cancer patients' unique stories of struggle, perseverance, and triumph. As Chief of Surgical Oncology at Baylor College of Medic...