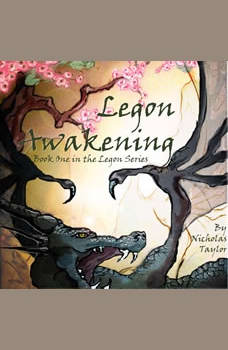 Epic fantasy with Dragons and Elves.

Set in a world that is not our own, Legon Awakening takes you through an epic journey into a land full of wonderment, illusion, and innovation.

Hello I'm Nicholas Taylor. I just wanted to take a moment to talk about why I wrote the Legon Series. With the Legon books I wanted to pull readers into another world with Elves, Dragons and a race that no one has seen before, the Iumenta. I want people to see the Legon world, and it's characters the way I see them. I also wanted to write a book that everyone could enjoy, from the person who has been reading fantasy their whole life, to someone who maybe is just getting into the genre. So it's with that in mind that I hope you enjoy reading Legon Awakening as much as I enjoyed writing it.

"Taylor is a brilliant writer in his use of structure and traditional elements of story telling. The arc of the story proceeds well and the plot is articulated and clear. The characters, however, are the strong part of this book. You love some and you hate others. You laugh, you cry and their trials affect you while you are reading. "