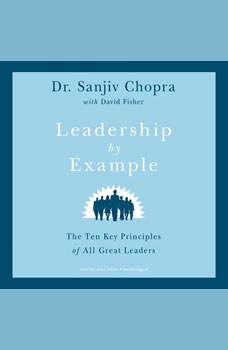 Leadership by Example: The Ten Key Principles of All Great Leaders

An accessible and inspiring guide to good leadership based on a popular lecture that Dr. Sanjiv Chopra has presented to thousands Very few of us are leaders all the time, in everything we do, but all of us can become a leader in specific situations. In a committee, in business, at a social club, or religious institution-we all find a time in our lives when we can lead. Few people set out knowingly to become leaders; rather, they see a need and find a way of dealing with it, and often others choose to follow their example. Based on a talk that he has given to more than sixty thousand people in at least seven countries, the LEADERSHIP mnemonic that Dr. Chopra explains is as follows: L - listen well. E - empathy. A - attitude. D - dreams and decisiveness. E - effectiveness. R - resilience. S - sense of purpose. H - humility and humor. I - integrity and imagination. P - principles, and willingness to pack other people's parachutes. Drawing from his experience as faculty dean for continuing education for Harvard Medical School, as well as from the writings and lives of great leaders throughout history, this easy-to-read, inspiring book serves as a reminder and a guide to becoming leaders in our own lives.