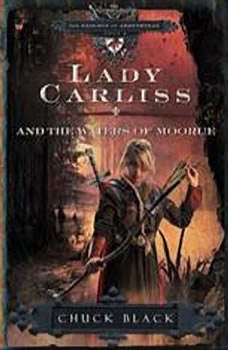 Lady Carliss and the Waters of Moorue

Lady Carliss faces the challenge of her life. Can she save the kingdom before it&#8217;s too late? Determined, smart, and a master of both the sword and the bow, Lady Carliss has proven herself as a veteran Knight of the Prince. Returning from a mission of aid, Carliss is plunged into adventure once again as she searches for the marauders responsible for kidnapping a friend&#8217;s family. Along the way she is reunited with Sir Dalton and discovers that the struggle in her heart is far from over. When Dalton falls to the vicious attack of a mysterious, poisonous creature, Carliss finds herself in a race against time. As Dalton clings perilously to life, she must find the antidote in the distant and strange city of Moorue. While there, Carliss uncovers the master plot of a powerful Shadow Warrior that will soon overtake the entire Kingdom. Her faith in the Prince and her courage as a knight are tested as she faces evil Shadow Warriors and a swamp full of dreadful creatures. The lives of many, including Dalton&#8217;s, depend on Carliss. But she cannot save them all, for time is running out. She faces an impossible choice: save Dalton, or let him die so that others may live.

Sir Rowan and the Camerian Conquest
by Chuck Black

A knight left for dead. A country on the verge of ruin. And an evil lord rising to conquer. Sir Rowan is the most decorated tournament knight in Cameria, but when he is attacked and left for dead, his world collapses. Betrayed and lingering at death...

The White Stag
by Kate Seredy

Winner of the Newbery Medal   For generations the tribes of Huns and Magyars had moved relentlessly westward, obeying the voices of their pagan gods, which compelled them to follow the elusive white stag to their promised homeland. They swept E...

Piece of Infinity
by Emily Bold

In the third and final volume of Emily Bold’s The Curse Series, Sam returns to the present day from seventeenth-century Scotland, reunited with her love, Payton, and relieved that the curse has been lifted. But their happiness is tempered by S...

Sir Quinlan and the Swords of Valor
by Chuck Black

Two friends face the Dark Knight&#8217;s deadliest scheme, but only one knight has the courage to overcome. Sir Quinlan leaves his boyhood friend to serve the Prince, fighting a battle darker and more intense than any he&#8217;s ever known. ...

He was called to fulfill a mighty quest, filled with fierce battles. A quest to bring hope to the kingdom&hellip;Having narrowly escaped death at the hands of the&#160;evil Shadow Warriors, Sir Gavin is given a new&#160;name by the Princ...