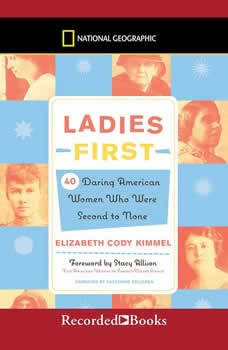 Ladies First: 40 Daring American Women Who Were Second to None

In 1849, Elizabeth Blackwell became the first American woman to obtain a medical degree. Following in her footsteps in the early 1980s, Brenda Berkman was the first woman to challenge New York City's ban on female firefighters. During the last few centuries, countless women have made amazing contributions to society. Women are now Nobel Peace Prize winners, world-class athletes, and talented inventors and adventurers. Some women, such as Shirley Muldowney-the first woman inducted into the Motorsports Hall of Fame-shattered perceptions about what women could accomplish. Others broke all the boundaries, such as Lynn Hill-the first person (man or woman!) to free climb the Nose at Yosemite National Park. Award winner Elizabeth Cody Kimmel's informative text will inspire kids to reach for their dreams, no matter how impossible they may seem. "The profiles ... are as inspiring as they are informative."-School Library Journal

Marley Dias Gets It Done - And So Can You!
by Marley Dias

Marley Dias, the powerhouse girl-wonder who started the #1000blackgirlbooks campaign, speaks to kids about her passion for making our world a better place, and how to make their dreams come true! In this accessible "keep-it-real" guide, Marley exp...

She Persisted Around the World
by Chelsea Clinton

The companion to Chelsea Clinton & Alexandra Boiger's #1 New York Times bestseller, She Persisted. Perfect for tiny activists, mini feminists and little kids who are ready to take on the world.Women around the world have long dreamed big, even w...

How Much Is a Little Girl Worth?
by Rachael Denhollander

You're beautiful, worthy, and you should be loved Because of all that you are. Different from anything else in the world, You are precious beyond the stars. How Much Is a Little Girl Worth? is Rachael Denhollander's tender-hearted anthem to little g...

She Persisted
by Chelsea Clinton

Chelsea Clinton introduces tiny feminists, mini activists and little kids who are ready to take on the world to thirteen inspirational women who never took no for an answer, and who always, inevitably and without fail, persisted.   Throughout A...

What is the Women's Rights Movement?
by Deborah Hopkinson

The story of Girl Power! Learn about the remarkable women who changed US history.From Susan B. Anthony and Elizabeth Cady Stanton to Gloria Steinem and Hillary Clinton, women throughout US history have fought for equality. In the nineteenth and earl...