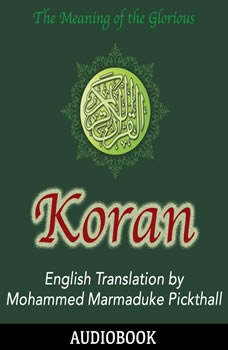 The Koran (Qur'an) is regarded by Muslims as the word of God (Allah) as revealed to the prophet Muhammad. It is divided into 114 chapters (surahs), arranged roughly by length. This version, The Meaning of the Glorious Koran, is a widely used English translation of the Koran by a Muslim Englishman. Many Muslims, however, including Pickthall, believe that true translations of the Koran from the original Arabic are impossible, and see translations into other languages only as useful interpretations.

The 100 Most Powerful Prayers for a Battle
by Toby Peterson

You will not achieve fulfillment and happiness until you allow God to be the architect of your reality. Imagine that with a few moments each day, you could begin the powerful transformation toward complete control of your own life and well being thr...

Purity. What exactly is it? According to bestselling authors Hayley and Michael DiMarco, purity is far more than abstinence from sex or other sexual activities. It's not about rules. It's not a list of don'ts. It's not about scare tactics, teen preg...