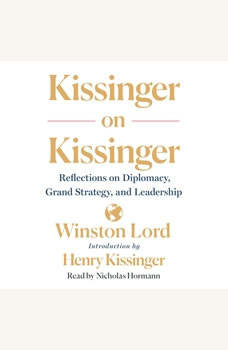 Kissinger on Kissinger: Reflections on Diplomacy, Grand Strategy, and Leadership

In a series of riveting interviews, America's senior statesman discusses the challenges of directing foreign policy during times of great global tension.As National Security Advisor to Richard Nixon, Henry Kissinger transformed America's approach to diplomacy with China, the USSR, Vietnam, and the Middle East, laying the foundations for geopolitics as we know them today.Nearly fifty years later, escalating tensions between the US, China, and Russia are threatening a swift return to the same diplomatic game of tug-of-war that Kissinger played so masterfully. Kissinger on Kissinger is a series of faithfully transcribed interviews conducted by the elder statesman's longtime associate, Winston Lord, which captures Kissinger's thoughts on the specific challenges that he faced during his tenure as NSA, his general advice on leadership and international relations, and stunning portraits of the larger-than-life world leaders of the era. The result is a frank and well-informed overview of US foreign policy in the first half of the 70s—essential listening for anyone hoping to understand tomorrow's global challenges.

Legion of Peace
by Muhammad Yunus

The Politics of Diplomacy
by James A. Baker III

Few men have played such a critical role in the most pivotal events of the second half of the twentieth century. In this audio presentation - in his own words and his own voice - James A. Baker, III uses his unique perspective to take us inside tho...