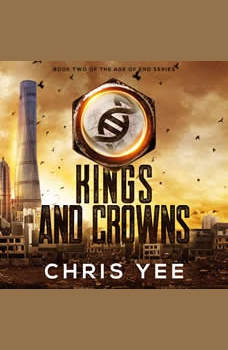 Chilling human experiments. A radical slaughter. To stop one, will they have to ignore the other?

Vince has saved his childhood friend Saul from the brink of evil. Now it’s time to put an end to the grotesque experimentations of the man who gave them immortality—and the thirst to kill. But when they attack The Spire, radicals with a common enemy thwart their assault with an even stronger strategy for revenge.

After forming a cautious alliance with the charismatic rebel leader, Vince and his companions must sift through the propaganda on each side of the impending battle. To take down the man who transformed them, they may need to play for both teams.

But if Vince and Saul lose the dangerous game, their mission and their eternal lives will end in an instant.

Kings and Crowns is the second book in the Age of End series of dystopian sci-fi novels. If you like imaginative new worlds, intriguing plot twists, and heart-racing action, then you’ll love Chris Yee’s gripping saga.

Buy Kings and Crowns to choose your side today!

A timid robot. A human scavenger. To survive the war-ravaged landscape, two enemies must work together.Household robot Silas is in serious need of a safe haven. After a brutal war that has pitted man against machine and ended with no clear winn...