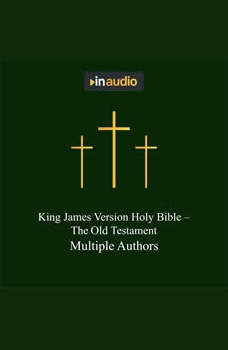 An Award-Winning Narration of the Holy Bible, New Testament, Complete and Unabridged. George Vafiadis spent over a year narrating the Bible. He would usually get up at three in the morning, check pronunciations and score the text for inflection, then spend three or four hours in the studio. This effort has made the InAudio Bible one of the best ever. George also narrated the Lincoln titles which have received many awards. His career as an actor and director of Shakespeare and Greek Classics spans over three decades. George now lives in Mattapoisett, Massachusetts, where he directs plays, acts in movies and is writing his memoirs.

Nursery rhymes and fairy tales have their roots in the mists of time and storytellers throughout the ages have shaped these magical moral stories. Children have always responded to these classic fables being captured by the perennial fight between g...

These amazing accounts of airmen recorded during the war include stories of air combat, music of the time, and recordings made on bomb runs over Europe and Japan. Eagles over Europe: (1) Introduction; (2) AAF Intro; (3) Bomb run over Germany, A-2...

The Old Testament of the King James Version Bible in a pure voice audio format: each book is read to you one voice at a time. Clear and uncluttered, this Bible speaks plainly, and making it easier for you to enter into God’s Word.

Accompanied by subtle background music, Max McLean's passionate reading of the majestic King James Version transforms the words of Scripture into a thrilling audio experience. Commuters, joggers, and anybody who loves God's Word will gain inspiratio...

Gospel According to St. John
by Multiple Authors

The Book of Psalms is a collection of one hundred and fifty prayers, poems and hymns. Proverbs is considered to be one of the books of Wisdom Literature. It is a collection of sayings that deal with many practical matters of daily life as well as on...