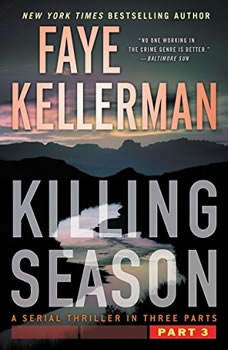 New York Times bestselling author Faye Kellerman delivers an electrifying crime novel of suspense as a young man’s obsessive investigation into his sister’s death draws him into the path of a sadistic serial killer.Ben is now certain his sister was the victim of a sadistic serial killer, and refuses to let any distractions get in his way of bringing this monster to justice: not his rocky relationship with Ro, his rekindled friendship with J.D. or Detective Sam Shanks's constant warnings to butt out and let the police handle the investigation. But the ominous winds of Santa Fe are kicking up and there’s nowhere left to hide. Find out what happens as Ben, Ro, and Detective Sam Shanks come head to head with the killer in the conclusion of Killing Season.

Blood on the Tracks
by Barbara Nickless

A young woman is found brutally murdered, and the main suspect is the victim’s fiancé, a hideously scarred Iraq War vet known as the Burned Man. But railroad police Special Agent Sydney Rose Parnell, brought in by the Denver Major Crimes ...

New York Times bestselling author Faye Kellerman delivers an electrifying crime novel of suspense as a young man’s obsessive investigation into his sister’s death draws him into the path of a sadistic serial killer.Part 1 of Killing Sea...

She burned Moretti…now it's his turn. Destroying Moretti was Special Agent Lara Grant's biggest coup, but she paid a heavy price to make the bust. She'll do anything to keep him—and her secrets—behind bars. But Lara kn...

Sheriff Bo Tully is the kind of western lawman who's as good with the ladies as he is with his guns, and he never lets a death threat get in the way of a good barbecue. He's a man with a sense of humor, which comes in handy when trying to establish ...

Detective Michael Gideon is used to being handed L.A.’s oddest cases, but his newest one assigned itself. When Gideon’s K-9 partner, Sirius, rescues a lost dog from a pack of coyotes, the duo tries to return her home—only to discov...

A Hidden Secret
by Linda Castillo

When a baby - only hours old - is discovered on the Amish bishop's front porch in Painter's Mill, Ohio, Chief of Police Kate Burkholder is called in to investigate. The newborn is swaddled in an Amish crib quilt, and the only other item found with t...