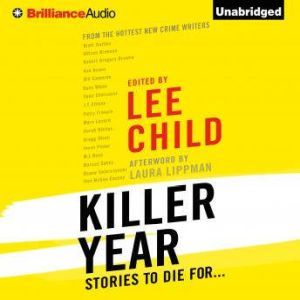 Killer Year: Stories to Die For...

A collection of killer stories from some of today's hottest crime fiction writers, edited by grandmaster and #1 New York Times bestselling author Lee ChildKiller Year is a group of thirteen authors whose first novels were published in the year 2007. Now, each member of this widely-praised organization has written a story with his or her own unique twist on the world of crime. Each entry in this one-of-a-kind collection is introduced by the author's Killer Year mentor, including bestselling authors James Rollins, Tess Gerritsen, and Jeffery Deaver. Other contributors—of original stories, essays, and commentary—include acclaimed veterans Ken Bruen, Allison Brennan, Duane Swierczynski, Laura Lippman, and M.J. Rose. This is an audiobook that no fan of the genre can do without.