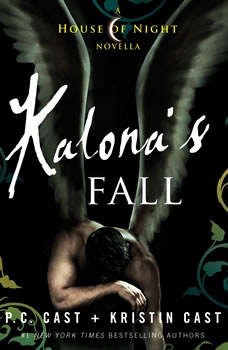 FROM WARRIOR AND LOVER TO ENEMY AND BETRAYER, THE TERRIBLE SECRETS OF KALONA'S PAST ARE REVEALED He was laughing with her as he spread his wings and lifted her from the ground, twirling her.Nyx gasped and clutched his neck. Kalona tightened his arms around her."Trust me, Goddess. I would never let you fall."From the Sun and from the Moon, two winged brothers are born: golden Erebus, playmate and friend, and mysterious Kalona, Warrior and lover, companions of the Goddess Nyx.From the first, Nyx loves them both deeply, but differently. With Erebus, she can talk and laugh and dance, and take joy in the games he plays among the humans of the Earth. With Kalona, the fire in her body burns bright, and she can rest in the solace of his strength and protection. But for Kalona, Nyx's nights are not enough. Every second he is not with her he is filled with doubt and longing, and every time he fails to please her, he cannot forgive himself. Ruled by anger and jealousy of his brother, and consumed by his love for his Goddess, Kalona seeks the power to prove his worth, and to claim once and for all that Nyx eternally belongs to him.And at the edges of the Earth, a Darkness is stirring, waiting for its chance, for the doorway in through a heart that it knows will welcome it…With more than 12 million books in print, rights sold in almost forty countries, and more than three years on The New York Times bestseller list—reaching as high as #1—the House of Night series is an international publishing sensation. Now, the excitement continues as the Cast mother-daughter duo shares the back stories of a few of the House of Night's most important—and mysterious—characters. In Kalona's Fall, the shadows in Kalona's past will finally come to light.