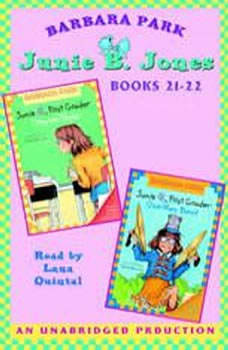 One Man Band
Go Room One! It’s time for the first-grade kickball tournament! Only, here’s the problem. Junie B. has hurt her big piggy toe and she can’t play on the team. So, now what? She definitely doesn’t want to be a cheerleader. But wait! Maybe she could be in Sheldon’s halftime show! Then all eyes would be on her! And she would be the star! Hurray! Hurray! Junie B. . . . in the spotlight. What could possibly go wrong?

Cheater Pants
Junie B. Jones has all the answers when it comes to cheating. It’s just plain wrong!But what about copying someone else’s homework? That’s not cheating, right? 'Cause homework isn’t even a test! And speaking of
tests . . . what if a friend shares an answer that you didn’t even ask for? Sharing definitely isn’t cheating . . . is it? Uh-oh. Maybe this cheating business is more complicated than Junie B. thought. Could she be a cheater pants and not even know it?