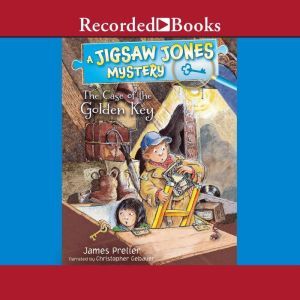 Jigsaw Jones: The Case of the Golden Key

Featuring friendship, school, family, and a diverse community, these early illustrated chapter book Jigsaw Jones Mysteries from James Preller have it all. When a new kid moves into town, he brings with him a mystery as big as his house! Reggie Armitage the III has found a box with a list of codes and a golden skeleton key?but he has no idea what the key opens or how to crack the code. It's a good thing 2nd-grade sleuths, Jigsaw Jones and Mila Yeh, are investigating The Case of the Golden Key. James Preller's wry, witty, Jigsaw Jones books are once again available to inspire the next generation of young readers, featuring both new titles and classroom classics!