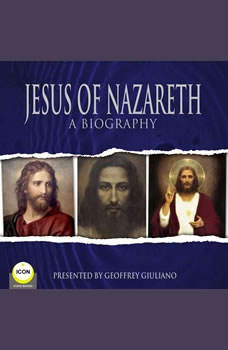 Jesus Of Nazareth A Biography

“And so I tell you, keep on asking, and you will receive what you ask for. Keep on seeking, and you will find. Keep on knocking, and the door will be opened to you. For everyone who asks, receives. Everyone who seeks, finds. And to everyone who knocks, the door will be opened.” JESUSIn this inspirational, spiritual biography of Lord Jesus; a simple man from Nazareth who changed the world forever by his compassion, humility, truth and love. Here is an audiobook adventure for all spiritual beings - regardless of the faith with which they identify. Let the light, love and life changing story of Jesus continue to inspire us all and cast a great light in this dark, temporary world of so much needless sorrow, torment and division.GEOFFREY GIULIANO is the author of thirty two internationally best selling books published by the biggest publishers in the world from 1984 until today. He is also an acclaimed Hollywood film actor, director, designer, and is the voice on over 500 popular audiobooks.Series producer Avalon Giuliano in New York Produced by Alex Franchi in Milan Edited and mixed by Macc Kay in BangkokICON intern Eden Garret Giuliano