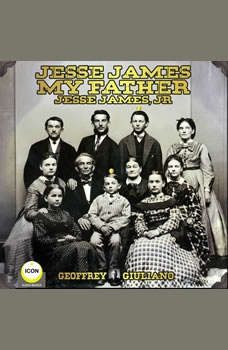 “We don't steal from the rich and give to the poor. We steal from the poor because they can't fight back, most of them and the rich take from us because they could wipe us out in a day.” JESSE JAMESJesse James was born on September 5, 1847, in Kearney, Missouri. James, and his brother Frank, served in the Confederate Army before embarking upon their fabled criminal careers in the Old West. The James brothers made a name for themselves as daring bank and train robbers, leading the James-Younger gang. Gang member Robert Ford killed Jesse James in 1882, after which James became a true legend of the Old West. Here is his own untold story as related by his son.GEOFFREY GIULIANO is the author of thirty two internationally best selling books published by the biggest publishers in the world from 1984 until today. He is also an acclaimed Hollywood film actor, director, designer, and is the voice on over 500 popular audiobooks.Series producer Avalon Giuliano in New York Produced by Alex Franchi in Milan Edited and mixed by Macc Kay in BangkokICON intern Eden Garret Giuliano