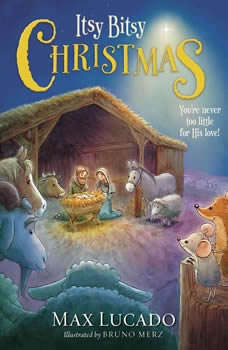 Itsy Bitsy Christmas: You're Never Too Little for His Love

You’re never too little for His love!

Do you ever feel like you are too small or too ordinary? That’s how Itsy and Bitsy feel. When these two charming little mice hear that a King is coming to Bethlehem, they run to find Him. But they can’t find the King, and other animals discourage them. “Don’t even try,” they say. “The King doesn’t care about little ones like us.” Itsy and Bitsy are just about to give up when something amazing happens.

Crafted by master storyteller Max Lucado, Itsy Bitsy Christmas helps children understand God’s great love and know that He sent His Son, the King of kings, for all of us—little or big, young or old.

Master storyteller Jim Hodges has partnered with Todd Wilson, the Familyman, to bring you these beloved Christmas stories, The Familyman's Christmas Treasury, in audiobook format. These wonderful stories will give your children hours of listening en...

Miracle Man&#160;is a beautifully illustrated biography of Jesus Christ by award-winning author and illustrator John Hendrix. For all Christian denominations and perfect for families to share throughout the year, this book will be especially bel...

The Second Release in an&#160;Epic Bible Adventure Series for Kids The last thing fourth-grader Kai Waters remembers (before the world as she knew it disappeared) is being surrounded by bullies on her walk home from school. What happens next can...

The Third Release in an&#160;Epic Bible Adventure Series for Kids The last thing fourth-grader Jake Henry remembers (before the world as he knew it disappeared) is napping at summer camp.&#160;What happens next can&#39;t be explained as ...

A thrilling chapter book about a brother, a sister, and a mysterious scroll that hurtles them through time to the Israelites' escape from EgyptThe Secret of the Hidden Scrolls series follows siblings Peter and Mary and their dog, Hank, as they d...

Welcome to the wonderful world of Lily Robbins! In this funny first story in a the Lily series, you’ll meet red-headed sixth-grader Lily Robbins. After receiving a compliment about her looks from a high-powered woman in the fashion industry, L...

Light is coming to the Dark Lands. But will it be too late to make a difference?In the future, the world is united under the power of one charismatic ruler, and everyone gets "The Mark" at age thirteen. The Mark lets citizens of the Global...