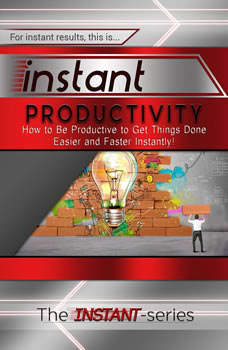 How to Be Productive to Get Things Done Easier and Faster Instantly!Shouldn't you be productive right now...instead of looking into how to be productive?No wonder why you aren't productive. Ironic, isn't it?Being productive, allows you to get things done easier, faster, but, most importantly, smarter so you use the less amount input of efforts and resources to yield the most amount output of results and rewards, giving you more time to do the things you love.That is ultimately what productivity is. Yet, productivity does not come naturally.Besides requiring extraordinary willpower, determination, and endurance to get things done as well as the luck of not having any distraction, which at times can't always be controlled, you have to know how to simplify things to be easier and completed faster.Put all these things together, no wonder why being productive is easier said than done.However, what if you CAN increase your productivity knowing just a few simple methods that will make you into a highly productive functioning working machine?Within "Instant Productivity":* How to come up with your own productive process plan of doing things and incorporate into your routine to get through your days easily.* How to make any task more fun to breeze through, like a piece of cake, that you'll wonder why it was so much difficult before.* How to use an over 100 years old model concept that has proven to make things done more quickly?* How to measure your productivity so you'll know what you're doing wrong and have to correct any malfunction in the way you perform.* How to use a simple formula to simplify things, getting other people involved to help you complete any thing better in record time.* Plus, custom practical "how-to" strategies, techniques, applications and exercises to increase productivity....and much more.Become much more productive to get things done easier and faster now!