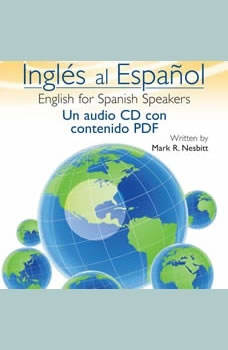 Finally, an easy to understand and follow guide to learning conversational English for Spanish speaking people. Whether you are learning English for the first time or trying to brush up, you will find Ingles al Espanol easy to use. Step by step, word by word translations complete with a CD-ROM for text assistance. This Oasis Audio Original creation will have you speaking English quickly and with more confidence.

Idioms for Kids and Everyday Use
by Tony R. Smith

The Idioms for Kids Everyday Use offers a new fresh look at the idiomatic phrases and sayings that make English a great language. This book includes 100 pages of visual idiom phrases that are classic and some are new. Idioms are used everyday and th...

Dr. Blair's Ingles in No Time
by Robert Blair

All About Nouns
by Miles Duke II

Do you know what the definition of a noun is? When it comes to English grammar nous have always been there. You will understand all of the nous we use everyday and the one we don't use often. We all know a noun deals with a person place or thing. Yo...

Living Language has been a proven and effective language learning instruction for over 65 years. Using techniques originally developed for the US State Department, the Living Language Method follows a four point approach from building a foundation o...

English Grammar - Theory and Exercises
by My Ebook Publishing House

"English Grammar - Theory and Exercises" presents the most important elements of English Grammar in a clear and simple manner. The book addresses all those who want to learn English, regardless of age, offering, through clear explanations and algori...