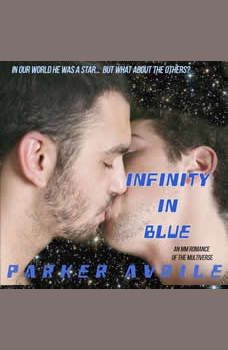 Infinity in Blue: An MM Romance of the Multiverse

Once Stoney discovers the secret of how to jump between the worlds, how can he resist the urge to keep looking for the universe where he can live forever?

Kyle is a guitarist, a model, a lost boy, an astronaut... but he's always there for Stoney. Their fated love is infinite.

Because "Infinity in Blue" is a science fiction story set in the multiverse, Stoney and Kyle confront some challenging worlds as well as their happily-ever-after worlds where they're destined to be together forever. The events of this story occur in an alternate universe to the world of the Runaway Model trilogy. Therefore, it contains no spoilers for the Runaway Model novels and can be enjoyed at any time. Themes include gay science fiction, gay romance, gay second chances, gay sliding doors stories, and LGBT sci-fi short fiction.