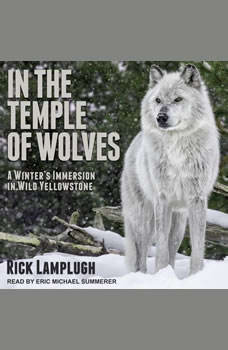 In the Temple of Wolves: A Winter's Immersion in Wild Yellowstone

When Rick Lamplugh reports for work at the historic Lamar Buffalo Ranch on New Year's Eve, he has one goal: to learn as much as possible about the ecology of the Lamar Valley and how wolves fit in. He has three frigid months to explore on skis and snowshoes, to observe with all his senses, and to listen to and talk with experts. Lamplugh's writing takes you with him as he watches winter-hungry elk and bison migrate to the Lamar Valley to graze. As wolves, coyotes, and mountain lions stalk the grazers while eagles, ravens, and magpies wait to scavenge. As the snowy backdrop brings this saga of death and life into sharp focus and makes it unforgettable. A literary blend of facts and feelings, In the Temple of Wolves celebrates nature's stark beauty and the importance of wolves, while revealing Lamplugh's inner battles with his own human nature.