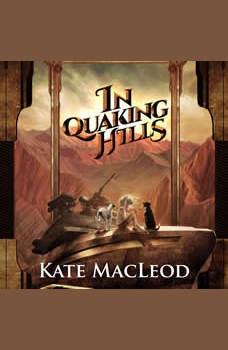 Series: The Travels of Scout Shannon

After spending the last four days of her life hiding out from a deadly solar particle storm in an underground bunker, trapped with six treacherous women and a trio of girl assassins, Scout Shannon just wants to find the man who conned her mentor and leave her home world for good.

Alas, the long-threatened war draws nearer and Scout finds herself caught in the middle, surrounded by rebels and bandits. Worse, she carries a pocketful of dangerous secrets with no one to entrust them to.

And the hills keep shaking. Something lurks deep underground. Something massive. Something world-destroying. Scout leaves in three days. If she lives that long.

"In Quaking Hills", the sequel to "Under Falling Skies" and the second book in "The Travels of Scout Shannon" series, a young adult science fiction novel for fans of plucky heroines, complicated boys, and loyal dog sidekicks.

Under Falling Skies
by Kate MacLeod

Scout Shannon's whole family died the day the Space Farers dropped an asteroid on their domed city. Now she lives alone, out in the wild with only her dogs for company. She prefers it that way.But Scout finds herself at a crossroads. One road leads ...

The Mars of Malcontents
by Kate MacLeod

Valentina knows how to live in the community spread throughout the old mining caves under the Martian ice cap. A violent place in a forbidding climate, but home for her and her brother.Until she wakes from a coma to find her brother gone. Her father...

A bloodthirsty king. A wrecked starship ready for war.A disabled mechanic is the planet's only hope.Breaker's home is cleaved by blood. The three tribes on the planet Scarlatti, whose only difference is their blood color, each want to exploit Breake...

When a deadly plague ravaged the Earth refugees fled into space, crowding into any space station or lunar colony that would take them. Decades passed and the descendants of the survivors struggle to live in anything remotely spaceworthy.Omesh,...

The Whole World for Each
by Kate MacLeod

After humankind fled Earth for space they discovered one inescapable truth. People die in space. And lots of dead people means lots of ghosts. April Nguyen earns a nice living getting rid of those ghosts. People all over the Solar System clamor for ...