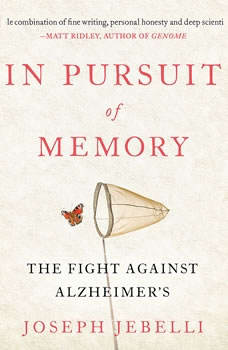 In Pursuit of Memory: The Fight Against Alzheimer's

For readers of Atul Gawande, Siddhartha Mukherjee, and Henry Marsh, a riveting, gorgeously written biography of one of history's most fascinating and confounding diseases--Alzheimer's--from its discovery more than 100 years ago to today's race towards a cure.SHORTLISTED FOR THE ROYAL SOCIETY SCIENCE BOOK PRIZE 2017LONG-LISTED FOR THE 2017 WELLCOME BOOK PRIZENAMED "SCIENCE BOOK OF THE MONTH" BY BOOKSELLERAlzheimer's is the great global epidemic of our time, affecting millions worldwide -- there are more than 5 million people diagnosed in the US alone. And as our population ages, scientists are working against the clock to find a cure.Neuroscientist Joseph Jebelli is among them. His beloved grandfather had Alzheimer's and now he's written the book he needed then -- a very human history of this frightening disease. But In Pursuit of Memory is also a thrilling scientific detective story that takes you behind the headlines. Jebelli's quest takes us from nineteenth-century Germany and post-war England, to the jungles of Papua New Guinea and the technological proving grounds of Japan; through America, India, China, Iceland, Sweden, and Colombia. Its heroes are scientists from around the world -- many of whom he's worked with -- and the brave patients and families who have changed the way that researchers think about the disease.This compelling insider's account shows vividly why Jebelli feels so hopeful about a cure, but also why our best defense in the meantime is to understand the disease. In Pursuit of Memory is a clever, moving, eye-opening guide to the threat one in three of us faces now.

Summary of The End of Alzheimer's: The First Program to Prevent and Reverse Cognitive Decline by Dale Bredesen
by Readtrepreneur Publishing

The End of Alzheimer's: The First Program to Prevent and Reverse Cognitive Decline by Dale E. Bredesen - Book Summary - Readtrepreneur(Disclaimer: This is NOT the original book, but an unofficial summary.)What if we could prevent Alzheimer's disease...

Instant Memory
by The INSTANT-Series

How to Improve Memory Instantly!We all have those days...You know, when you forget...where you placed your keys; when is your spouse's anniversary and now he/she is mad at you; when is your doctor's appointment; when to send important documents to y...

Is It Alzheimer's?
by Peter V. Rabins

A medical expert answers your common questions about memory loss, causes of dementia, diagnosis, prevention, treatment, and more. Perhaps someone in your family has been diagnosed with Alzheimer disease?or maybe you worry about developing memory lo...

While growing older is inevitable, many of the troubles we associate with aging--including dementia, disability, and an increased dependence on others--are not. The choices we make now can help us to maintain our vitality, a sharp mind, and our inde...

How to manage the symptoms and maximize your awake timeWhat if your comprehension of Alzheimer’s could make your life better? This handy-dandy guide will put you on the right path to understanding what Alzheimer’s disease encompasses, so...

Sensory Processing Disorder: Parents Guide To The Treatment Options You Need to Help Your Child with SPD
by Larry Jane Clew

Sensory processing disorder is a disorder where the brain has trouble getting and giving an answer to information that comes in through the senses. This is book explains Sensory Processing Disorder (SPD) in a simplified and precise way, and presents...

Loving Someone Who Has Dementia
by PhD Boss

Research-based advice for people who care for someone with dementia Nearly half of U.S. citizens over the age of eighty-five are suffering from some kind of dementia and require care. Loving Someone Who Has Dementia is a new kind of caregiving book...

When Reasoning No Longer Works
by Angel Smits

Nearly five million families deal with Alzheimer’s Disease and other forms of dementia on a daily basis. They do this with little training, and often only their good intentions guide them. When Reasoning No Longer Works is the traini...

As more of us live longer, the fear of an old age devastated by brain diseases like dementia is growing. Many people are already facing the challenges posed by these progressive and terminal conditions, whether in person or because they are caring f...