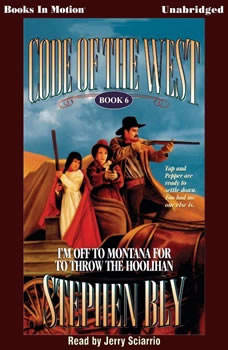 I'm Off To Montana For To Throw the Hoolihan

Series: Code of the West #6

Tap Andrews has left his past behind. He's no longer a Wyoming lawman backing down any mobs, nor a Brand Inspector dodging rustler's bullets. He has loaded up the wagon and is moving the very pregnant Pepper and their 11-year old ward to a seemingly perfe