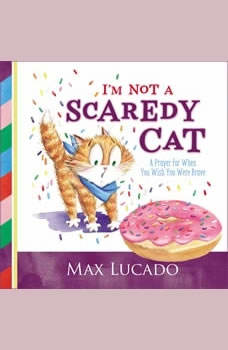 I'm Not a Scaredy Cat: A Prayer for When You Wish You Were Brave

Follow a silly series of misadventures as scaredy-cat faces his worst fears: an appalling abundance of (gulp!) yellow and pink sprinkles on his donut, an elephant on the verge of a ginormous sneeze, and the terrifyingly loud chime of a clock. For each of the fears, Max provides this reassuring child’s version of Philippians 4:6–9:

God, you are near.

God, you are here!

A fun read for children and parents, I’m Not a Scaredy-Cat will open doors for important conversations about fear in a nonthreatening way and help you instill godly bravery in your kids.