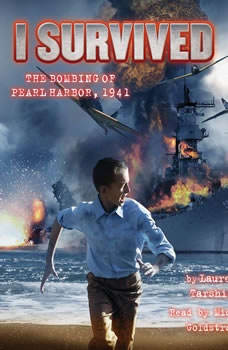 Seventy years later, Pearl Harbor comes to life for a new generation of readers! History's most terrifying moments are brought vividly to life in the action-packed fictional I SURVIVED series! Do you have what it takes to survive ... the bombing of Pearl Harbor? Eleven-year-old Danny Crane is alone on his favorite beach in Hawaii when the world is torn apart and World War II officially hits the United States. Does he have what it takes to find his way home in the midst of the bombs, the smoke, and the destruction of the day that will live in infamy?

I Survived #02: I Survived the Shark Attacks of 1916
by Lauren Tarshis

In the summer of 1916, ten year-old Chet Roscow is captivated by the local news: a Great White shark has been attacking and killing people up and down the Atlantic Coast, not far from Chet's hometown of Springfield, New Jersey. Then one day, swimmin...

Audacity Jones to the Rescue
by Kirby Larson

An irrepressible orphan named Audacity Jones is headed on an adventure of historic proportions! The first book in a brand-new series from beloved Newbery Honor author Kirby Larson! Audacity Jones is an eleven-year-old orphan who aches for adventur...

Dazzle Ships: World War I and the Art of Confusion
by Chris Barton

During World War I, British and American ships were painted with bold colors and crazy patterns from bow to stern. Why would anyone put such eye-catching designs on ships? Desperate to protect ships from German torpedo attacks, British lieutenant-c...

Women Win the Vote!
by Nancy B. Kennedy

Invasion of Normandy, The
by Moira Rose Donahue