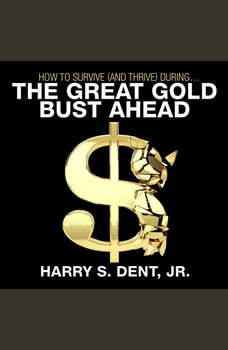 How to Survive (and Thrive) During the Great Gold Bust Ahead

Over the years, bestselling author and renowned Harvard economist Harry Dent has accurately predicted the dot com bust of the early 2000's, the crash of the U.S. housing market in 2006, the financial meltdown of 2008 and the plummet in crude oil prices in 2015. Now he's back with a bold new forecast - one that calls for gold to take a disastrous dive in price, all the way down to $250. In his brand new audiobook, How to Survive (and Thrive) During the Great Gold Bust Ahead, Harry warns investors that moving their assets into gold isn't the safe haven they think it is. And why it won't protect them from the biggest market collapse since The Great Depression, set to hit in 2016. In this shocking audio program you'll discover: The unstoppable economic forces heading our way that will result in a collapse in gold prices… (Chapter 1) Why the inflation crisis in America is a myth, despite our money overprinting and how gold will suffer because of it… (Chapter 2) Exactly how low gold prices will drop in the next five years… (Chapter 3) The predictable 30-year cycle gold follows and where we fall in it right now… (Chapter 4) PLUS: details on his "trade of the decade" which could be the safest (and best value) investment you can make over the next ten years. But there's a limited window to get in on it! (Chapter 6)

Aftershock
by Robert B. Reich

The author of 12 acclaimed books, Robert B. Reich is a Chancellor's Professor of Public Policy at the University of California, Berkeley, and has served in three national administrations. While many blamed Wall Street for the financial meltdown, Aft...

HUMANITY EVOLVES AT THE SPEED OF JUSTICE. This is a book about justice and the technologies, systems, and public policies that are necessary to achieve justice. Humanity's technology is evolving at an exponential rate, but our laws and cultural...

In a sweeping narrative about the people and the politics behind the budget, Pulitzer Prize–winning reporter David Wessel looks at the 2011 fiscal year (which ended September 30) to see where all the money was actually spent, and why the budge...

Living Well in a Down Economy for Dummies
by Tracy Barr

Get smart about spending and saving—and ride out a recession!Looking for practical ways to make every dollar count? This savvy guide gives you expert tips for tightening your belt and saving cash in every area of your life—from your hou...

In his national bestseller The Roaring 2000s, Harry S. Dent, Jr. forecast a booming market that he says will continue to rise through the first eight years of the twenty-first century. Dent's many predictions in that book, from unprecedented Dow Jon...