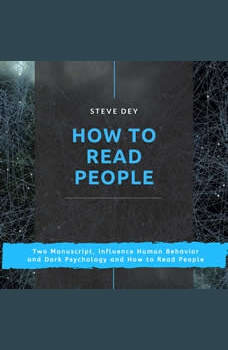 The human mind is a far-reaching place. It holds so many thoughts, emotions, secrets, and expressions, it would be literally impossible to read them all the time, but if you understand the basics of the human mind, then you aren’t going to have a problem when it comes to reading people.This audiobook containsBasics of human psychologyWhat is manipulation?How to persuade peopleFundamental techniques to handling peopleTips for dealing with manipulative peopleMind controlNeuro-linguistic programmingManipulation techniquesHow to analyze peopleThe power of persuasionMind control techniquesAfter listening to the audiobook, you can expect to have greater insight into your own actions and the actions of others. You will have a strong grounding in the mechanics of basic psychology of reading body languages, manipulation, allowing you to make your own decisions about manipulating others, and recognise when others are manipulating you.

Emotional Intelligence: Learn how to Develop and BoostYour EQ. Improve Your Social Skills, Charisma and Emotional Agility
by Michaela Morrison

It's Time to Completely Master Your Thoughts, Emotional, and Life in General!A lot of what happens in your life is mostly determined by what you are thinking. Your state of mind clearly gives way to the realization of capabilities, opportunities, an...

In this popular American book, accomplished public speaker and self-help charlatan Elsie Lincoln Benedict outlines her pseudo-scientific system of "Human Analysis". She proposes that, within the human race, five sub-types have developed through evol...

The desire for dignity is universal and powerful. It is a motivating force behind all human interaction—in families, in communities, in the business world, and in relationships at the international level. When dignity is violated, the response...

Do you have a beautiful heart?Do selfish people always take advantage of your good?Does your goodness always cause you to feel helpless?Do people make sense of things with flattery or do it for themselves?Do you want to recognize such people early a...

Emotional Intelligence Mastery: The Guide you need to Improving Your Social Skills and Relationships, Boosting Your 2.0 EQ, Mastering Self-Awareness, Controlling Your Emotions, and Win Friends
by John Hoffner

Practical strategies to master your emotions effectively!Knowing how to control your feelings and your reactions to them is known as “emotional intelligence.” We are getting richer, but less and less happy. Depression, suicide, relatio...