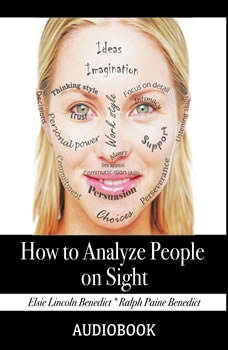 How to Analyze People on Sight

In this popular American book, accomplished public speaker and self-help charlatan Elsie Lincoln Benedict outlines her pseudo-scientific system of "Human Analysis". She proposes that, within the human race, five sub-types have developed through evolutionary processes, each with its own distinct character traits and corresponding outward appearance. She offers to teach the reader how to recognise these five types of people and understand their innate differences.

Emotional Intelligence Mastery: The Guide you need to Improving Your Social Skills and Relationships, Boosting Your 2.0 EQ, Mastering Self-Awareness, Controlling Your Emotions, and Win Friends
by John Hoffner

Practical strategies to master your emotions effectively!Knowing how to control your feelings and your reactions to them is known as “emotional intelligence.” We are getting richer, but less and less happy. Depression, suicide, relatio...

The Pleasure Zone
by Ph.D. Resnick

We have the capacity for boundless pleasure, so why aren't we happier?

Care of the Soul
by Thomas Moore

#1 New York Times BestsellerWith a new introduction by the author and additional material, this 25th anniversary edition of the #1 New York Times bestseller by Thomas Moore provides a powerful spiritual message for our troubled times.In this specia...

The desire for dignity is universal and powerful. It is a motivating force behind all human interaction—in families, in communities, in the business world, and in relationships at the international level. When dignity is violated, the response...