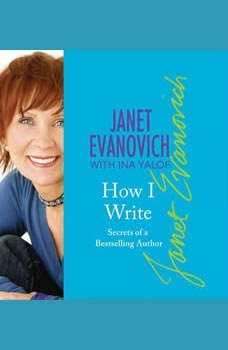 How I Write: Secrets of a Bestselling Author

How many people would kill to be a bestselling novelist? Especially one like Janet Evanovich.Writers want to know how a bestselling author thinks, writes, plans, and dreams her books. And they are primed for a book from Janet Evanovich that tells, in a witty Q&A format:- How she comes up with such remarkable characters- How she nails the perfect name every time- How she finds out insider details- Just how she sets up those masterful plots- What the life of a full-time writer is really like- What she'd tell an aspiring author about the publishing industry- And much, much more!This book details the elements of writing and publishing a novel, and addresses all categories of fiction-from mystery/thriller/action titles to romance; from stand-alone narratives to series. It offers practical and inspiring advice on such subjects as structuring a plot and handling rejection. And it combines one of today's most successful fiction writers with a published non-fiction writer in Ina Yalof who teaches creative fiction. HOW I WRITE is the perfect reference for anyone looking to improve their writing, and for those fans who are hungry to find out more about just how Janet Evanovich ticks.

Power Speed-Reading Performance System
by Made for Success

Like rocket fuel for the mind! What is speed reading? How do you do it? Now that we've entered the Information Age, more and more people are asking these questions every day. Whether you'd like to get through the morning newspaper faster, manage ...

Narrate and Record Your Own Audiobook: a Simplified Guide
by M. L. Buchman

Audio is the up-and-coming market, but the price of entry can be a horrific $300-500 per finished hour and up.M. L. Buchman has recorded and published over 30 audio titles—himself.Here he covers the basics you need to record your own audiobook...

All the basics about dyslexia in a concise guide.You may know someone who has dyslexia, or maybe you have it yourself. It can be a real mystery if you’re left in the dark with comments that you’re just dumb or aren’t trying hard en...

My Twentieth Century Evening and Other Small Breakthroughs
by Kazuo Ishiguro

The Nobel Lecture in Literature, delivered by Kazuo Ishiguro (The Remains of the Day and When We Were Orphans) at the Swedish Academy in Stockholm, Sweden, on December 7, 2017, in an elegant, clothbound edition.       In their an...

The Origin of Names, Words and Everything in Between
by Patrick Foote

The Origins of Names Explained Explore the world of names: What is something that literally everything in existence has in common? It all has a name! With Name Explain, you can learn the origins of these names. From countries and cities to toys and...