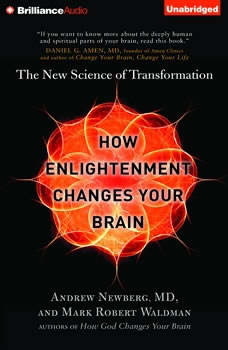 How Enlightenment Changes Your Brain: The New Science of Transformation

The bestselling authors of How God Changes Your Brain reveal the neurological underpinnings of enlightenment, offering unique strategies to help readers experience its many benefits.In this original and groundbreaking book, Andrew Newberg, M.D., and Mark Robert Waldman turn their attention to the pinnacle of the human experience: enlightenment. Through his brain-scan studies on Brazilian psychic mediums, Sufi mystics, Buddhist meditators, Franciscan nuns, Pentecostals, and participants in secular spirituality rituals, Newberg has discovered the specific neurological mechanisms associated with the enlightenment experience—and how we might activate those circuits in our own brains.In his survey of more than one thousand people who have experienced enlightenment, Newberg has also discovered that in the aftermath they have had profound, positive life changes. Enlightenment offers us the possibility to become permanently less stress-prone, to break bad habits, to improve our collaboration and creativity skills, and to lead happier, more satisfying lives. Relaying the story of his own transformational experience as well as including the stories of others who try to describe an event that is truly indescribable, Newberg brings us a new paradigm for deep and lasting change.

A fascinating dialogue on the human desire to make up stories between Nobel Prize–winning author J. M. Coetzee and psychotherapist Arabella KurtzThe Good Story is an exchange between a writer with a long-standing interest in moral psychology a...

How to Stay Sane
by Philippa Perry

THE SCHOOL OF LIFE IS DEDICATED TO EXPLORING LIFE'S BIG QUESTIONS IN HIGHLY-PORTABLE PAPERBACKS, FEATURING FRENCH FLAPS AND DECKLE EDGES, THAT THE NEW YORK TIMES CALLS "DAMNABLY CUTE." WE DON'T HAVE ALL THE ANSWERS, BUT WE WILL DIRECT YOU TOWARDS A ...

A Theory of Human Motivation
by Abraham H. Maslow

This is the article in which Maslow first presented his hierarchy of needs. It was first printed in his 1943 paper "A Theory of Human Motivation". Maslow subsequently extended the idea to include his observations of humans' innate curiosity. His the...