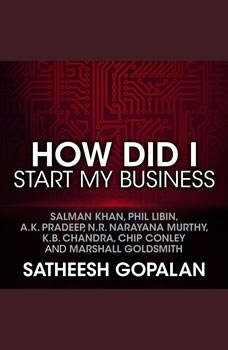 How Did I Start My Business

This audio program takes listeners on a world-wide journey to show how great achievers use creativity, innovation, and technology to start businesses that thrive in a hyper-competitive world. Some of the greatest innovators of our time like Salman Khan, Phil Libin, A.K. Pradeep, N.R. Narayana Murthy, K.B. Chandra, Chip Conley and Marshall Goldsmith discuss how they started and offer listeners advice and encouragement.