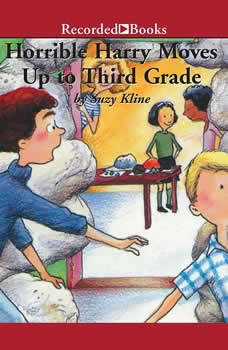 Horrible Harry Moves up to the Third Grade

When Horrible Harry starts third grade, he expects everything will be familiar. He is sure he will have the same teacher, the same class, and the same room. But when he walks through the door the first day, he discovers that the school is as unfamiliar as Mars! Soon Harry and the other students in Room 3B are sharing their souvenirs from the summer. Everyone is trying to read the cursive writing on the bulletin board. Some things haven't changed, though. Harry is planning to bring his creepy, crawly pet to school. Young listeners will love joining Harry on six hilarious adventures, including A Deadly Event, Murder in the Mine, and Sidney Disappears! Suzy Kline's fun-filled series is a favorite of even the most reluctant young readers, and Johnny Heller's spirited narration is perfect for Harry and his pals.