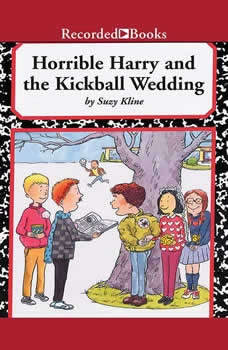 Horrible Harry and the Kickball Wedding

It's the week before Valentine's Day. All the students in Room 2B are thinking about wearing red, passing out valentines, and having a class party. With all the plans for fun, nothing horrible could happen, could it? But before the day is over, Sydney has made Harry mad. When he finds out why Sydney is bugging him, Harry hatches a big plan. It is silly, outrageous--and perfect for Valentine's Day! Students, teachers, and parents all love Suzy Kline's series about Horrible Harry and the other busy members of class 2B. Filled with fun and plenty of surprises, these chapter books are perfect for encouraging independent reading. Narrator Johnny Heller's performance of this series receives rave reviews.