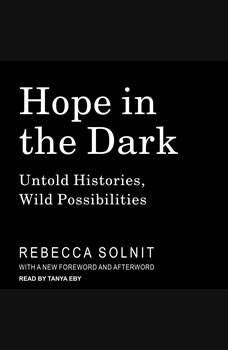 With Hope in the Dark, Rebecca Solnit makes a radical case for hope as a commitment to act in a world whose future remains uncertain and unknowable. Drawing on her decades of activism and a wide reading of environmental, cultural, and political history, Solnit argued that radicals have a long, neglected history of transformative victories, that the positive consequences of our acts are not always immediately seen, directly knowable, or even measurable, and that pessimism and despair rest on an unwarranted confidence about what is going to happen next. Originally published in 2004, now with a new foreword and afterword, Solnit's influential book shines a light into the darkness of our time in an unforgettable new edition.

In her debut children's book, Rebecca Solnit reimagines a classic fairy tale with a fresh, feminist Cinderella and new plot twists that will inspire young listeners to change the world. In this modern twist on the classic story, Cinderella, who wou...

Making Sense of the Alt-Right
by George Hawley

During the 2016 election, a new term entered the American political lexicon: the "alt-right," short for "alternative right." Despite the innocuous name, the alt-right is a white-nationalist movement. Yet it differs from earlier racist groups: it is ...

Whose Story Is This?
by Rebecca Solnit

Who gets to shape the narrative of our times? The current moment is a battle royale over that foundational power, one in which women, people of color, non-straight people are telling other versions, and white people and men and particularly white me...

In this volume in the MIT Press Essential Knowledge series, J. M. Berger offers a nuanced introduction to extremist movements, explaining what extremism is, how extremist ideologies are constructed, and why extremism can escalate into violence.